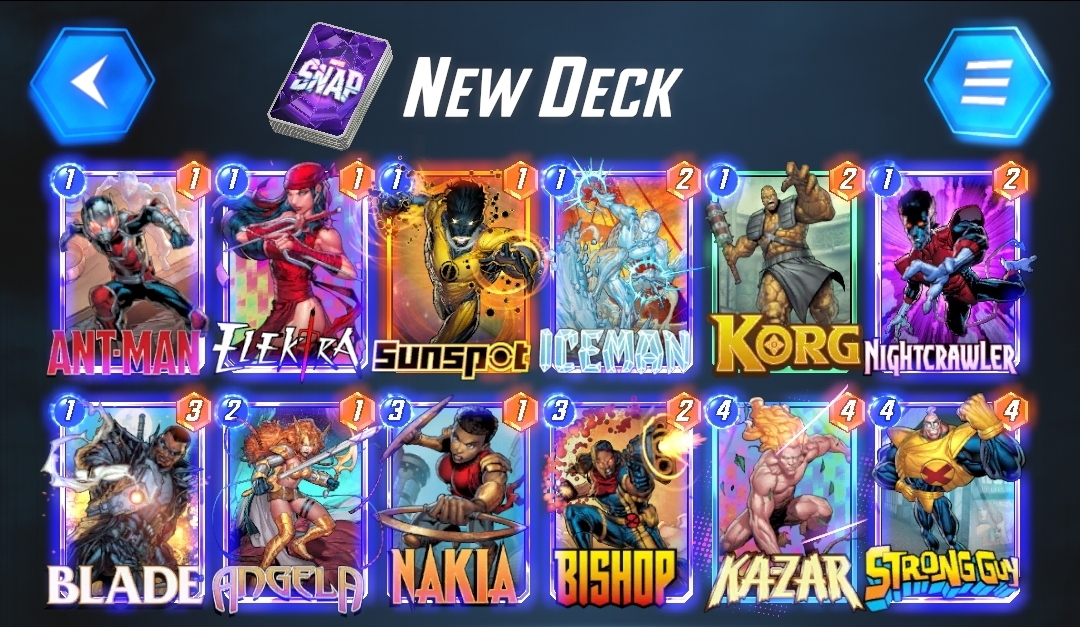 Despite the nerfs to Strong Guy and Ka-Zar on July 19, 2022, Ka-Zar Zoo (Kazoo) is still a force to be reckoned with thanks to its ability to withhold information from your opponent until the last moments.

The general gameplan for this deck is to play your cards in a way that enables you to play as many cards as possible on turn 6, but still being able to dump your entire hand to enable Strong Guy. This will be very different depending on locations, which I'll cover later in this post.

In order to be able to optimally empty your hand, you must play at least 1 card before turn 3. Yes, even if you have Nakia in hand already. Yes, even if it's Elektra on an empty board.

If you don't, there's a chance that you'll be stuck with cards in your hand (even if you play Blade) - or you won't be able to sequence your cards in a meaningful way.

Preferably, you'll get to drop Sunspot on turn 1 and pass turn 2 or play Angela on turn 2. The next best plays for Turn 2 are Korg (giving more turns for your opponent to draw a rock compared to playing Korg later in the game) or Iceman.

Hopefully by turn 3, you've drawn Nakia or Bishop and can drop them into play.

In the unfortunate circumstance that you've only drawn 1-drops, you can afford to play only 1 card on turn 3 - but you'll need to spend all your power on turns 4, 5, and 6 (Blade can offset this, but if you're discarding a 1-drop to Blade you're probably best-off retreating).

Turns 4 and 5 are ideally when you're playing Ka-Zar and Strong Guy, with any Non-Blade 1 cost unit on turn 5.

From my experience, turn 5 is when you'll want to snap (if you're planning on snapping). If you're getting to play Ka-Zar and Strong Guy on turns 4 and 5 you're probably in a good position to snap (there are opposing decks and locations that make this not true, however).

Dump your hand and collect your cubes 😎

This is the hardest turn of the game for Zoo. You need to study the board and evaluate how you can win. Do you need to ignore a lane and count on winning the other 2? Does your opponent have 4 cards in a lane and you can beat them by 1 point, then pump extra cards to another lane? How many cards are in your opponent's hand?

The best way to get better with this deck is to pause on the ending board when you lose and consider if there was a different way you could have sequenced the last turn in order to win. For me, the most common way I noticed I was losing was by not completely abandoning a lane and committing to win the other 2 - especially if my opponent needed to commit resources to ensuring I wasn't going to win that lane.

At 1/(1+3), Ant Man is all about being a value play. The "downside" to Ant Man is needing to place 4 cards in a single location, but when your deck is playing every card drawn during a game, it's not particularly difficult to enable.

When placed before turn 6, Ant Man can bait your opponent's Elektra, or mislead your opponent to thinking you're going to commit 4 cards to a location.

There aren't very many ways to remove an opponent's card from play, and Elektra being a 1-drop slots her well into Zoo decks to combat other Zoo decks.

One of the downsides to Elektra is that when your opponent has multiple 1-drops at a single location you don't get to decide which card is destroyed. Because of this, I will generally play Elektra early if my opponent has a Sunspot or Ant Man and I can guarantee the removal of them.

In most cases where you play Sunspot you'll be getting 2-3 points of value, which is on par with the rest of our 1-drops. But the games with Sinister London or Cloning Vats are when Sunspot shines!

Sometimes you'll even be able to spend turn 6 getting +10-18 points!

Iceman and Korg are 1/2 flex slots - I chose both for their ability to disrupt my opponent.

Across many decks in the meta, Nightcrawler is the premier way to work around restrictions on playing cards to locations - and in Zoo, Nightcrawler performs the same role.

While most of our 1-drops are providing 2 points of power, Blade comes in above average at 3 points - and in combination with Strong Guy converts the discard "downside" into upside.

The discarding isn't fully without downside, however. Because of the discard, Blade can only be played optimally on the last turn of the game when you can control which card is discarded, or when your hand is empty. In the event you have the worst possible draw of all the 3+ cost cards and Blade on turn 2, you may have to concede to not playing either Bishop or Nakia (probably Bishop).

Personally, I find Angela to be an unusual card in Zoo. In order to optimize your value, you need to commit Angela as the first card at a location - and because of her triggers, effectively tells your opponent "Hey, I'm going to be playing 3 more cards here :)". This is polar opposite to the Zoo gameplan of telling your opponent as little as possible until it is too late.

However, including an "I will fight you" card that comes down on turn 2 also has its upsides when it comes to bluffing your opponent. If you can read your opponent right, they might choose to forfeit the location Anglea is played at, allowing you to not commit the full 4 resources to the location, while still winning it.

Nakia took a decent hit with the nerf to only give +2 to 2 cards in your hand. This certainly impacts the deck, but unlike some decks where Nakia will buff 2 cards you end up not playing, Zoo has the benefit that you don't care which cards Nakia buffs since you're planning to play your whole hand out in most games. I've still been playing with the unmodified list - although this may be less successful as players continue to streamline their decks.

Cards I've considered replacing Nakia with include Lady Sif to double down on ensuring Strong Guy activates and Daredevil for the ability to play perfect turn 5's or disable your opponent's Daredevil.

I'm not going to lie - Bishop can lead to some weird sequences when you have both Bishop and Nakia and sometimes you'll need to just play Bishop on turn 6 as a 3/5.

But Bishop is huge when it comes to winning locations that get locked down such as Storm or Kyln since you'll know roughly what your opponent's value is and can easily determine if you're going to win that location or not.

Despite the nerfs, Strong Guy is still probably my pick for the strongest card in the deck.

The ability to very consistently be a 4/10 (or 12 with Nakia) and swing a location in your favor single-handedly is a huge part of what makes this deck work as well as it does.

If you only have one card here, it has +5 power

Depending on the other 2 locations you may be able to slam Ka-Zar or Strong Guy here and win with the +5 power, but just as often I find that it’s worth just dumping more power here on turn 6 (especially since [human] opponents will tend to want to only put 1 card here, especially the lower you are on ladder).

On turn 4 shuffle your hand into your deck. Draw 3 cards

If this is revealed on turn 1, curve out [spend all your power each turn]. I tend to prefer playing Bishop over Nakia on turn 3 if you have both, but Nakia is still fine.

After turn 4, whoever is winning here draws 2 cards

The trick with this location is you don’t really want to win this location, but you do want your opponent to think you want to win it so that they’ll commit their early turns to Asgard. This sets you up to be able to better guesstimate the number of points your opponent will have here when making your turn 5/6 plays.

When you play a card here, add a copy to your hand

I find this to be one of the hardest locations to play around (Sinister London and Elysian being the others in my top 3). When you have Sunspot in hand when this is revealed, this location is phenomenal for making skipping a late turn a huge power move. Generally, I assume I won’t be enabling Strong Guy when Cloning Vats is in play, but with some Blade shenanigans and playing mostly 1-drops there are situations where it happens.

One of the biggest benefits to this deck is that Strong Guy can now be played here with Ka-Zar, usually making for an easy location win.

The goal with this location is to intend on playing the least number of cards on turn 5 as possible (which conveniently is our game plan anyways). If this is revealed on turn 1/2 - you should play 2 cards before turn 3. If this is revealed as the third location, you’ll need to hope that you draw Blade.

If you hit Sunspot on turns 1 or 2, you’re going to have a great time - especially if this is in combination with Cloning Vats or Sinister London. Otherwise, I think this makes most matchups at least slightly worse since it enables them to hold their cards back longer (or slam Sandman a turn earlier 😥).

By turn 2 you can probably determine if your opponent is interested in hard contesting here. If they are, you can throw Iceman/Korg on this location to get the disruption while not committing your stronger cards to the location.

After each turn, give cards here +1 power

This location has, in my opinion, the largest impact on the play patterns of this deck. When Muir is revealed, you immediately want to commit a larger quantity of cards to it than your opponent so that you’re getting more benefits over the course of the game - sometimes playing 2 1-drops is better than Angela on turn 2 if this is revealed. This is also a particularly good location for Nightcrawler so that you can shift the extra benefits to another location.

Opposite of Muir Island, the locations that grant -X power to cards want you to play as few cards to that location as possible. If your opponent plays 3 cards and you only play 1 for example, they’re getting -9 power versus your -3 across the board.

See the notes on Negative Zone, but reverse. You should almost always be ending the game with 4 cards at this location.

When you play a card here, add a copy to another location

Similar to Elysian, I’ve found that in general this will benefit your opponent more than you. Since our curve is so low, on average we’ll be getting less value from the copies than our opponents (unless they happen to also be playing a Zoo deck).

If you have no cards here, +1 energy each turn

Assuming none of the other locations lock you down in any way, this location will win you the game. As long as you don’t have a completely awful hand, you can greed for the extra +2/4 from Nakia when Superflow is in play.

Because of the nature of SNAP as a 12 card deck combined with the Pool 3 system for acquiring cards, I find it disingenuous to say decks are the same when 1-2 key cards may be different. So instead of difficult matchups, just some generally difficult cards to deal with: